Today’s Friday! But what does Friday mean, aside from Friday Props? Friday is a day in a week, in a month, in a year, in a decade, etc. But Friday only has meaning if it has context. Todays Props go out to those who have wondered about, and visualized various scales. From time, to size, to bytes, data has been given context through visual interpretation and, spoiler alert, it’s cool stuff.

Here Is Today is an interactive, visual representation of time created by freelance designer/ illustrator Luke Twyman.  The visualization features a diagram of today in relation to the existence of the universe. and a whole slew of time based measurements in between. Featured in his portfolio is another interactive data visualization that shows the breakdown of life on earth. 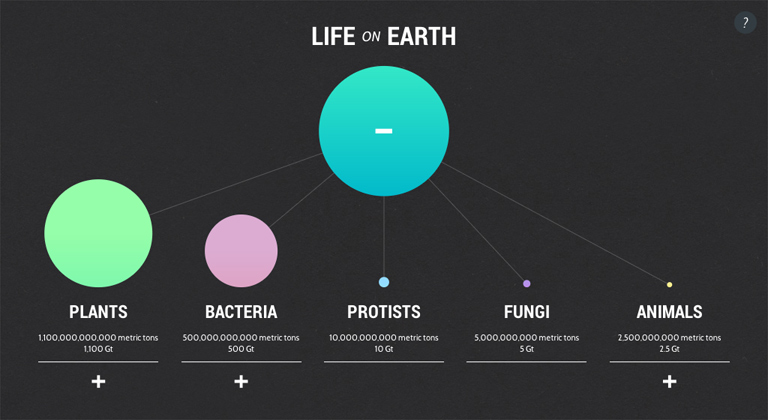 How about the scale of internet? Google estimates there’s over 5 million terabytes of data floating around the web. To give you a sense of what that means, let us consider google itself. Via Google you can reliably search for and find almost anything. But Google only grants access to the tip of an unquantifiably huge iceberg; estimated to be about 0.04% of the internet in its entirety. It’s easy to get lost in the depths of the internet, and here’s an interactive map that helps show us why. The map depicts web traffic to various sites worldwide. While it doesn't show all the web, it does put the internet into perspective. Simply put, it’s massive.

How about something more tangible? This scale of the universe, diagrams the size of objects ranging from quantum foam to the entirety of the known universe organized into a tunnel you can scroll into/ out of. Each object depicted is interactive, granting specific measurements and other tidbits of information. Spend some time with the site and you’re bound to find something unexpectedly large, small, or otherwise. For example, the minecraft world is roughly five times larger than that of the planet earth. Who knew?

Have you run across anything interesting in your travels? Share it with us in the comments or via our facebook and we’ll pass it on!