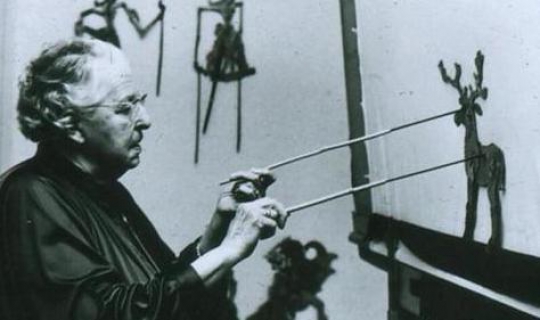 In a first for Friday Props we are handing out posthumous Props to Lotte Reiniger for her amazing breakthroughs in early animation techniques, and by early we are talking full-length feature film animation ELEVEN YEARS before Walt Disney produced Snow White. (Is it us or does it seem that women inventors rarely get the credit due at the time of their invention?)

It's one thing to use existing tools to create something, but it is quite another to invent tools to allow you to express your vision. Her work on the film The Adventures of Prince Achmed (1926) involved devising the first form of the multiplane camera which she used in all her work.

Her fascination with the Chinese folk art of paper cutting and silhouette puppetry play central roles both in her childhood and later in her artistry which included credited work on 59 films.

In a 1916 interview Reiniger sais she loved working for children because they are a "very critical and very thankful" public. We don't qualify as children, but the magic of her work surely transports us back to childhood simplicity and fantasy and for that we, too, are thankful.