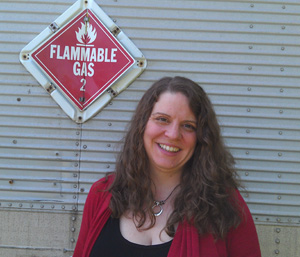 The year is 2025 and the Zombie Apocalypse has devastated the United States, all save for Vermont, thanks to Edgeworks Creative and its ingenious co-founder, Cynthia Ryan. In the small town of Waterbury, this highly creative, fun and sometimes funny (there’s occasionally an issue with the punchline being forgotten because of the intricacy of the jokes) woman figured out the KEY to saving humanity through design. Cynthia wanted to be an artist from a young age and honed her skill while watching her grandparents, both professional artists, work in their design studio. Her passion for art spurred her to go to school and study visual media, giving her a strong foundation in design which she provided to her clients in a timely, cost-effective and ascetically pleasing manner... before the dark ages. Little did she know that her ancestors were passing down a valuable skill that not only would provide for her living, but also enable the continuation of the human race. Cynthia found there is more than one way to control a zombie invasion. Yes- there is the basic method (aim for the head and run like heck in the opposite direction) but she figured out that her skill and technique was so [....] Read More >>