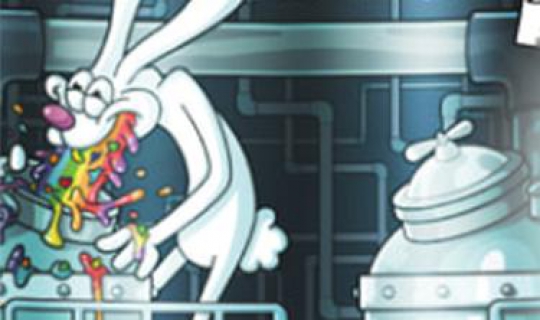 If you follow us on Instagram then you probably already know that here at Edgeworks Creative we kind of have a thing for cereal. We stock a cereal bar for the crew here at the office and often we try out the kinds of cereals that moms all over America won't let their kids eat. The ones loaded with sugar, shapes and surprise.  We're also fans of rainbows (and puppies and unicorns).

When we heard that Pontoon Brewing in Sandy Springs, GA was mixing up the silly rabbit and the taste of the rainbow into a Berliner Weisse beer we knew we had to hand out some Props. We only wish we could be there to stand in line and try it!!

The only question I have about this label is whether or not it's a good marketing idea to have the rabbit vommitting up a rainbow into the tank our beer is made in?

The rabbit so silly we giggle

The rainbow so tasty we wiggle

A brewer down south

Brings just for our mouth